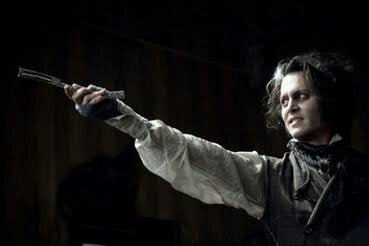 If you are unaware, the above is a description of the memorable finale of “My Friends” from the musical Sweeney Todd, the Demon Barber of Fleet Street; my all-time favourite musical when I was 15. Todd had returned to London after a false imprisonment robbed him of his life, love, and family, to seek revenge on those who had wronged him. As the title suggests, he was a barber, and in this number, he had been reunited with the tools of his trade; his razors (his “friends”). Now these parts of himself have been returned, he sets out for revenge! Check out the song here, it’s pretty good.

13 months ago, I sat on the sidelines of a hockey Grand Final. 3 months pregnant, the world spinning and my legs failing each time I took the field. I sat out, having given it my best shot to move past the nausea. That was 13 months ago. Over the past 8 months I have watched hockey games, first swollen, bloated, and counting down until the birth of my baby, then too fragile, too tired, and waiting for my body to heal. For the first time in 13 years I watched a season of hockey pass me by, never once putting my shin guards on, never considering where my mouthguard was, and never once securing my hair so it didn’t brush my forehead annoyingly during a short corner. I watched.

It was nice, I reflected at the close of the season, to have no responsibility, being able to watch my husband play, and to take a break from the chaos of running between grounds, juggling games, umpiring commitments, filling out the match card, and counting goals. It was nice, but I didn’t kid myself; a part of me was missing. I wanted to return to hockey mid-season, just as I wanted to be fit enough to play out the previous season with no issues. I always imagined myself a fit, healthy, and as energetic as always pregnant woman. People told me I was ‘glowing’, or that I made it look easy, but the woman sitting on the sidelines during a Grand Final, too sick to be worked up about what was happening on the field; she disagreed. And the woman 6 weeks postpartum who still couldn’t roll over in bed without pain; she disagreed. The woman who made it to the end of the hockey season, only just being assured from a physiotherapist that it would be safe for me to start building up to hockey again; she also disagrees.

So this last weekend just gone by, was special.

Next goes the shoes… I knew these already fit. I wear them almost everyday. It’s a bit early, but I can’t help myself. Shin guards go on, and I pull my socks over the top. Adrenalin starts pumping through my veins, and I remember that I think I used to wear a glove?

I did! Here it is, tucked away 13 months ago, next to my mouthguard that had only done one season when I sat on the sidelines. With my hair tightly tucked out of my eyes, I reach for my stick. And here it is; my Sweeney Todd moment.

At last, my arm is complete again.

One thought on “My arm is complete again.”